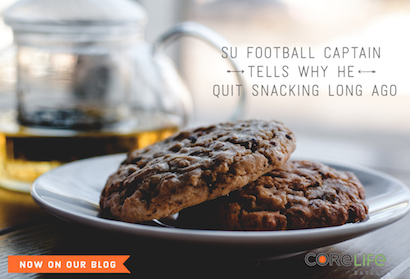 Everyone likes some tasty cookies from time to time. Or cake. Maybe a little pie too. Snacking can be addicting. Former Syracuse football captain, Sam Rodgers, explains how he quit snacking in exchange for a healthy lifestyle:

I had no idea what I was capable of – but I did know that I LOVED soda.

As a kid, I was, to put it pleasantly, chubby. I was never a troublemaker so my parents did not have to enforce many rules, but the one that always seemed to drag me down was only one soda a week. I constantly would break this rule by sneaking a Pepsi out of the fridge in our garage, or a Dr. Pepper if I was really lucky. As you might imagine, coupled with my soda addiction, my eating habits were also disorderly. I knew that I was overweight but the stigma that eating healthy was a sign of weakness had me brainwashed.

It all changed one Monday evening. Every Monday, my household chore was to collect the garbage around my house, which meant walking by the scale in my parent’s bathroom. For many weeks I had avoided stepping on it, afraid of what I might see. But eventually my curiosity got the best of me.

I was alarmed. Right there in the bathroom, I vowed to make changes. Forget all the conflicting nutrition information that is available; my 8 grade mind knew that if I cut out snacking between meals and lowered my soda intake, I would be on my way to a healthier life.

So that’s what I did. I quit snacking. I stopped eating potato chips after school and the occasional bowl of ice cream before bed. Later that week, I gave myself a challenge. I was not going to drink soda for one year. I did not post it to Facebook, Instagram, or Twitter – I just did it.

The results were amazing.

Interestingly, I did not just see a lower number on the scale – my life was better. I was happier, more engaged in school, more active and more driven. I started to see the power of discipline and taking complete control of my own life. After a year of no soda, I did not even like the taste anymore. After achieving my goal of no more junk food, I was able to dig further. It became not only “what foods should I stop eating, but also what foods should I start eating?”

Meet a challenge, then raise the bar. This became my mentality. 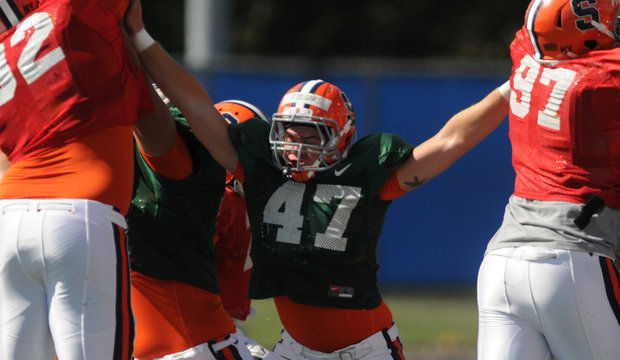 I accepted a full scholarship to play football at Syracuse University in the summer of 2010. When it came time to choose my major, it was an easy choice: Nutrition.

I have a story to tell, and I want to inspire everyone to reach their full potential. For me, it started as a little challenge and developed into a lifestyle change. You can do the same by staying disciplined and staying driven. No one can face your challenges; no one else can achieve your goals for you.